This year’s college football season—which has continued in the U.S. despite serious risks to players—has put deep social inequalities in stark relief.

A few months ago, I watched football players from Duke University, my alma mater, and the University of Notre Dame, my current employer, take to the gridiron in one of the first games of the 2020 college season.

Because of my personal connection to both, it would’ve been an interesting matchup to witness in person. Instead, I watched the game from the safety of my home—and was horrified at the circumstances in which the players were taking the field.

As a result, very little looks or feels familiar about daily life at universities. In the spirit of social distancing, many administrators have minimized student populations on campuses and shifted classes to virtual formats.

And yet young men, disproportionately young Black men, continue to run onto college gridirons every Saturday to play a high-contact sport.

As an anthropologist who studies college football, I’m not entirely surprised.

When I was conducting fieldwork during the 2017–2018 football season with Black athletes at universities in the southeastern U.S., I found that even then, players were expected to excessively train and push their bodies.

This year, universities have counted on players to persevere through the current public health crisis, sometimes after signing liability waivers.

In the world of college football, life feels disturbingly similar to the pre-pandemic world. It feels normal, even—and that’s not a good thing. 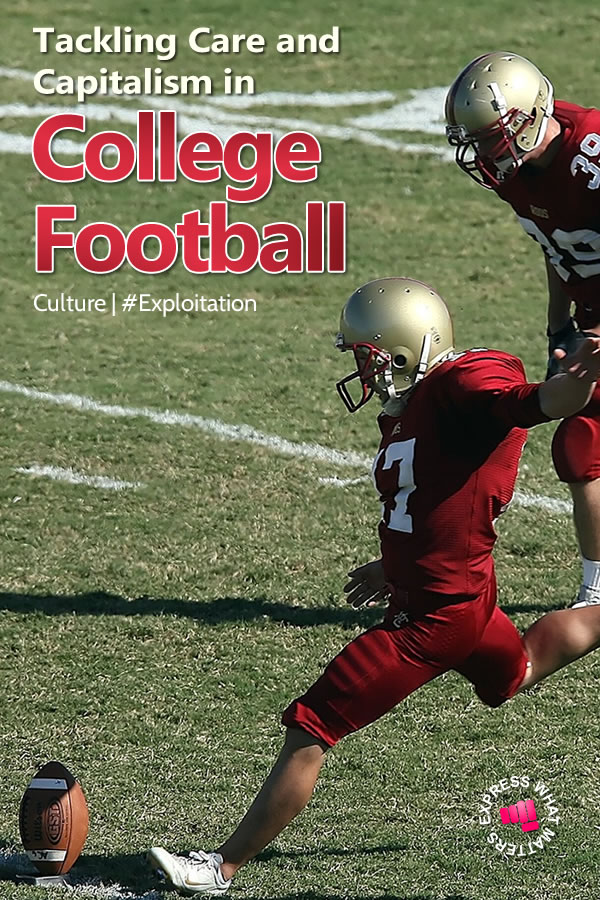 These young players are risking their health to entertain fans and make money for their institutions—with some even advocating for their right to do so—all for the slim possibility that they could one day become professional athletes.

I became acutely aware of the pressures placed on football players’ bodies when I ended up with a broken arm in January 2018 while immersed in fieldwork research.

My first day back on campus after my injury I made my way to the Football Center, where the team worked out, practiced, and met with coaches.

While struggling to maneuver my awkward cast and bulky sling, I ran into one of the players, Isaiah*.

“You’ll fit right in with us,” he chuckled. “A lot of guys are in slings right now because of their surgeries. Carter is one of them. You should find him.”

I soon learned that Carter had undergone shoulder surgery in late January for an injury he had sustained in mid-September.

When I asked why he waited so long to go through with the procedure, Carter downplayed the seriousness of the injury.

“I tore the labrum in my shoulder, so it was minor,” he told me.

He listed the names of at least five other teammates who had the same injury.

I pointed out that perhaps the injury seemed ordinary in his world, but it was not a common injury for non–football players.

He laughed, acknowledging the truth of my statement. “Even so,” he continued, “plenty of guys play with it torn, and that’s what I did.

If I could, I wanted to play through the season.”

The team’s athletic trainers knew about his injury and supported him postponing the surgery until the end of the season.

Carter, for his part, knew that his chances of going pro were limited, but he said he pushed himself to keep playing because of the joy of playing a sport that had been part of his life for so long.

And he was taken care of: Carter was carefully monitored to ensure the injury didn’t get worse as he continued to play, and the football program covered the surgery and rehab expenses.

Still, as I learned more about the economic importance of football for the university, I came to see these kinds of decisions as exploitative.

The football program was hoping to extract as much labor as possible from Carter, a particularly strong player.

By surveilling Carter’s condition and encouraging a later surgery date, the team could keep him on the field throughout the season and increase their chances of winning more games, garnering more revenue, and securing more prestige.

Carter’s predicament, I came to realize, epitomized a concern for maximizing the potential of each player’s body for the benefit of the team and the university.

Since August, many universities have taken precautions mid-semester in an attempt to quell the spread of the virus among the student population—with some going as far as to send all students living on-campus home.

But many of their football teams are still in town, often practicing daily and playing weekly.

Despite some back and forth, play for all five major Division I football conferences—known collectively as the Power Five—resumed by Saturday, November 7.

Given the risk of contracting the coronavirus, and a troubling heart condition that may affect college athletes (and others) infected with COVID-19, football programs have gone on the offensive to make sure their players can play throughout the entire season.

For instance, they have tried to ensure that the season can continue by doing regular testing, as evident in the higher rates at which athletes are tested when compared with other students on campus.

When the Power Five announced their decisions to play this football season, I was immediately reminded of Isaiah’s quip about my ability to blend in with other recovering players in their braces and slings, along with Carter’s explanation of the timing of his surgery.

The way that many universities have dealt with the virus so far mirrors their habitual responses to treating breaks, tears, bruises, sprains, and concussions.

In the world of college football, life feels disturbingly similar to the pre-pandemic world.

Football programs patch players up so they’re able to perform on the field during the season.

Because of this approach—save for the masks on reporters and coaches, and the missing fans in some stadiums—college football for these conferences is more or less business as usual.

And I do mean business. Continuing the season means revenue for almost every entity involved, except for the players themselves.

Athletes in professional sports leagues such as the NBA and the NFL are workers—often highly compensated ones. College players are workers, too, but they are not paid a salary. Click to Tweet

Instead, under the guise of amateurism, they are referred to as “student-athletes,” even though universities clearly value them more as “athletes” than as “students.”

The pandemic, which has disproportionately affected Black, Indigenous, and Latinx people, has made it more difficult to deny the social and racial disparities and exploitative labor practices that exist at the heart of college football.

Economic inequalities are made painfully clear in a new National Bureau of Economic Research paper, which shows that the commercial success of men’s college basketball and football relies heavily on the unpaid labor of players, who are more likely to be Black and from low-income neighborhoods.

Extracting players’ labor comes with very tangible monetary benefits. Canceling the Power Five football season would have put at risk at least US$4.1 billion in fiscal-year revenue for athletic programs.

In March, anthropologist Adia Benton reflected on how the pandemic has brought these inequalities to the forefront.

In discussing the decision to cancel March Madness, the highly lucrative spring tournament for college basketball, Benton pointed out that had the tournament gone on as planned, the NCAA (the governing body of college sport) would’ve been forced to recognize the paradox of the “student-athlete” moniker.

After all, how could they have justified keeping basketball athletes on campus while sending other students home after spring break for their safety?

But, as a relatively familiar fall football season comes to a close, it’s become clear the NCAA has still not dealt with this paradox.

Football teams, coaches, administrators, and institutions of higher education—all the entities that make up the system of college football—do invest in and exhibit care for players.

However, as their responses to both mundane injuries and COVID-19 demonstrate, they do so not for players’ individual well-being but to secure financial gain from their free labor on the field.

Ultimately, football programs treat athletic bodies as commodities and invest in these bodies to keep them healthy enough to play.

Seen from this lens, the 2020 college football season represents just one example of what anthropologist M. Kamari Clarke calls “the forms of contemporary racial capitalism that permeate contemporary life.”

After weeks with a hard cast, countless sessions of physical therapy, and months of wearing a removable plastic brace, my broken arm healed just fine.

But every time my arm aches, or I struggle to extend it, I’m reminded that my body does not function as it did before.

Knowing this makes me think of the players on the gridiron, risking their own health to play a sport that has become integral to the social and political fabric of U.S. society.

Institutionalized care to treat their athletic bodies, after all, only lasts as long as their football careers.

The lingering effects of the routine injuries that once defined the sport might now be joined by long-lasting COVID-19 symptoms.

Once their time on the team ends, I wonder how players’ bodies will heal and what kind of care they will subsequently receive.

While my injury will likely always impact how my arm performs, I’m told that the bone has become strongest in the spot where it was fractured.

Will we be able to say the same for the bodies of college football players?

* All names of interviewees have been changed to protect people’s privacy.

This article is republished from Sapiens under a license. 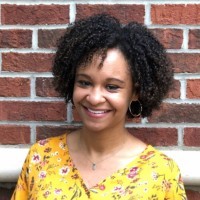 Tracie Canada is a cultural anthropologist with research and teaching interests in race, sport, kinship, and the performing body. She received her Ph.D. from the University of Virginia and is currently a postdoctoral research associate and incoming assistant professor at the University of Notre Dame.

More on: Exploitation Know Your Worth 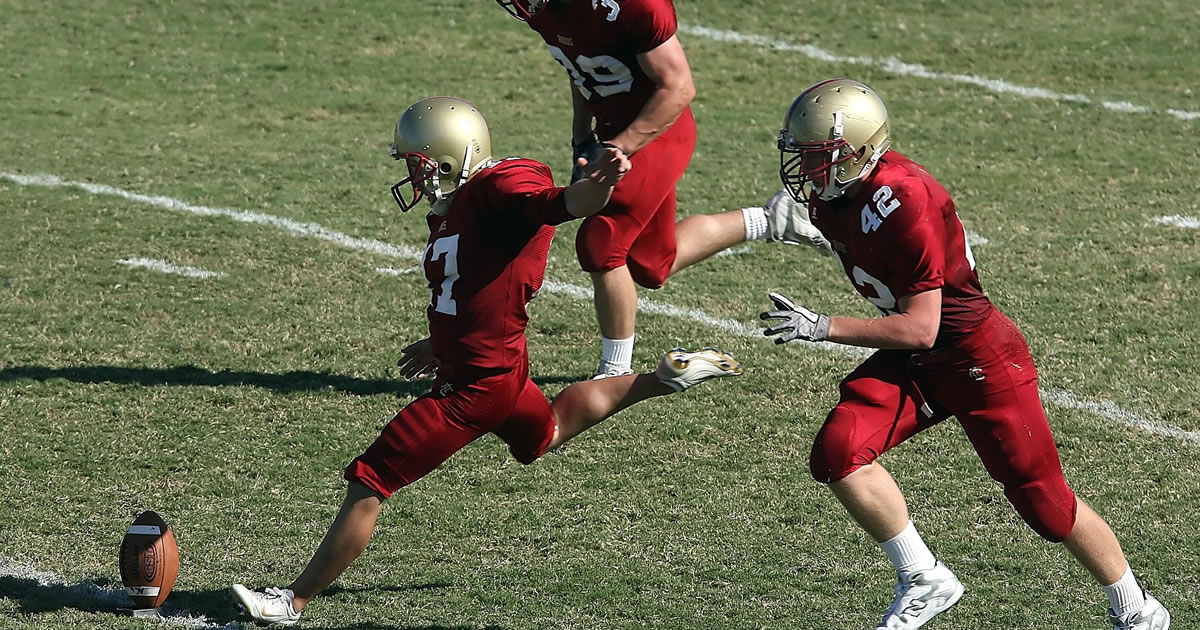 I watched football players from Duke University, my alma mater, and the University of Notre Dame, my current employer, take to the gridiron.
Subscribe to Our Monthly Magazine