Domineque Ray, set to be executed by the state of Alabama in February, made an appeal to have his imam by his side at his death. To deny him that was unconstitutional, Ray’s lawyers argued. Christian chaplains had been present for Alabama executions for years. Ray’s appeal made it all the way to the U.S. Supreme Court.

In a 5-4 ruling, the court said no to Ray. Ray’s request, it held, came too late, and it would have required Alabama to train Ray’s chosen imam in security measures in order for him to be present for the execution.

“To justify such religious discrimination, the State must show that its policy is narrowly tailored to a compelling interest,” she wrote.

“I have no doubt that prison security is an interest of that kind. But the State has offered no evidence to show that its wholesale prohibition on outside spiritual advisers is necessary to achieve that goal.”

Ray, without his spiritual counselor, was executed on Feb. 7.

Ray’s loss before the Supreme Court was his final defeat over decades of legal argument. Ray, convicted of killing three teenagers in the 1990s, had insisted prosecutors withheld critical evidence.

He’d argued that his lawyers were inadequate. ProPublica examined at length one of Ray’s central claims: That his lawyers had failed to introduce compelling evidence of his history of abuse and trauma during the penalty phase of his second murder trial.

All of those appeals failed, however, gaining little national attention. His scheduled execution was on track to happen without great note in a state with one of the highest rates for capital punishment.

The Supreme Court’s involvement, however, changed that. Ray’s case, complete with Kagan’s notably vivid dissent, was the first of several the court dealt with in a span of weeks.

The series of rulings — in a Texas case and another in a Missouri case — struck many veteran observers as remarkable. The justices seemed to be arguing angrily about the facts of the cases, but also about whether they were being properly debated.

“The Supreme Court’s Bitter Feud Over a Controversial Death Penalty Case Boils Over Into the Public,” read another.

On April 1, Adam Liptak, the Supreme Court correspondent for The New York Times, wrote one of the articles, with the headline “Rancor and Raw Emotion Surface in Supreme Court Death Penalty Ruling.”

The article referenced all three cases and offered a full variety of the vigorous back-and-forth among the justices.

We reached out to Liptak to give us some context and insight into the recent dust-ups over the death penalty. A graduate of Yale Law School, Liptak practiced law for 14 years before joining The New York Times’ news staff in 2002.

He was a finalist for the 2009 Pulitzer Prize in explanatory reporting. He has taught courses on the Supreme Court and the First Amendment at several law schools, including Yale and the University of Chicago.

The justices in the Ray case decided on the single question of whether the failure to allow him an imam at his execution violated his rights. In such late appeals, do the justices typically have much sense of the additional details of the case and a defendant’s prior appeals?

We ask because we spent a lot of time examining Ray’s claims concerning his penalty phase representation. Would the justices likely have known much of that disputed case history?

Even in cases decided on the merits after full briefing and argument, the Supreme Court tends to consider only one or two discrete legal questions.

In March, for instance, it heard arguments on only the question of whether there had been race discrimination in the sixth trial of Curtis Flowers, a death row inmate in Mississippi, even though the podcast “In the Dark” had raised a host of substantial questions about his guilt.

The justices are even less likely to consider questions beyond the ones they were asked to decide when cases reach them in the context of emergency applications in death penalty cases.

They often have only hours to act, and they seldom look beyond the lower court rulings granting or denying stays of execution and the parties’ hastily assembled briefs.

On the night the Supreme Court allowed Ray’s execution to proceed, the justices were also distracted by another emergency application, one that at the time had a higher profile, concerning a Louisiana abortion law.

I would add that the five conservative justices in the majority did not understand themselves to be deciding “whether the failure to allow him an imam at his execution violated his rights.”

They said they were deciding whether he had raised his claim too late.

Neal Katyal, former acting solicitor general for the Obama administration, tweeted of the Ray ruling that

“100 years from now, law students will read about this decision. It may be read alongside Dred Scott, Plessy v. Ferguson, Korematsu, and the Chinese Exclusion Act cases.”

Katyal shares a lot of his opinions on television these days and is a fierce critic of the Trump administration.

What do you make of this one? 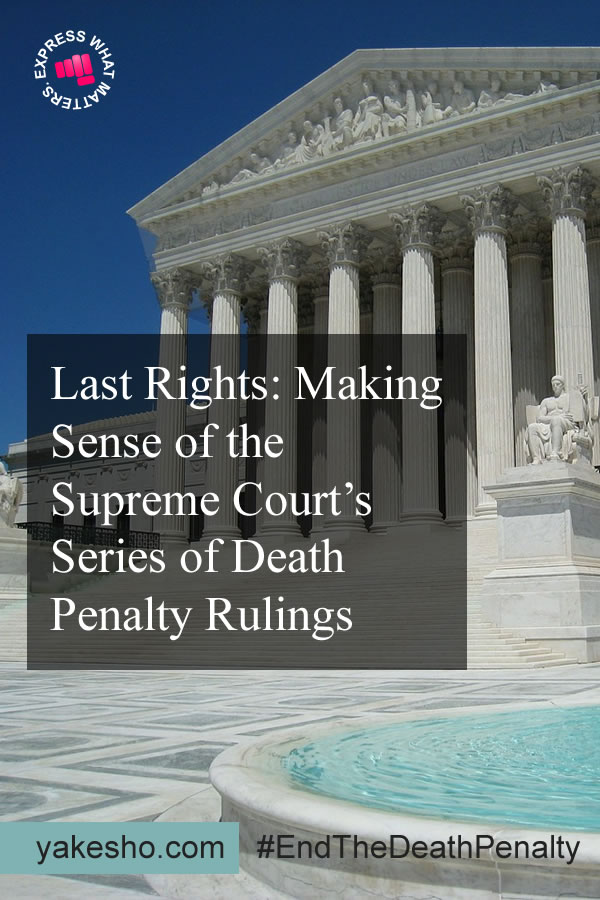 The ruling in the Ray case was met with disapproval across the political spectrum and especially from conservatives devoted to religious liberty.

That is strong language from a member of the court who is ordinarily quite measured.

So while there might have been a bit of hyperbole in what Neal said, it did capture the profound disappointment over what a lot of people thought was an ill-considered ruling.

Indeed, the court itself came to the opposite conclusion in a very similar case a couple of months later, by an apparent 7-2 vote.

In the case you wrote about, one that had provoked “rancor and raw emotion” among the justices, there seemed to be some anger about “re-litigating” the Ray case.

Is that a common complaint? Are justices not typically supposed to do that?

It was unusual to see the heated exchanges over the Ray case in yet a third death penalty ruling, this one concerning a Missouri inmate’s claim that he would suffer excruciating pain if executed using the state’s lethal-injection protocol.

The justices try to keep things civil and to move on after big disagreements. A key rule at the court, Justice Stephen G. Breyer has said, is that “tomorrow is another day.” In the Ray case, the court seems to be disregarding that rule.

The ruling in the Ray case was one of several the court has made in death penalty appeals of late. Is there something larger going on, do you think, as you read the decisions?

One law professor said that “these three death penalty cases may demonstrate the court’s growing pains as it moves further away from the ideological center.”

That’s one way to put it.

I’d say there is frustration and impatience on the right over what it perceives to be endless delays and gamesmanship in death penalty litigation and an increasing discomfort on the left with capital punishment as such.

Who's Policing the Police Unisex Hoodie

Safety is not soley an individual responsibility. But it always begins with self. Be safe. Not sorry. Stay vigilant. Express it with yaKesho merch! 👊🏿👊🏾👊🏽

Imagine a fresh approach to public safety that focused on de-escalation first and physical force as a last resort. Express it with yaKesho merch! 👊🏿👊🏾👊🏽

1 in 4 women and 1 in 7 men have been victims of violence by a partner in their lifetime. Express the continued commitment to ending domestic violence. 👊🏿👊🏾👊🏽

Imagine a fresh approach to public safety that focused on deescalation first and physical force as a last resort. Express it with yaKesho merch! 👊🏿👊🏾👊🏽

Officer! We're Your Boss! Not Your Enemy! Unisex Hoodie

Sometimes the means to an end erroneously becomes the end in and of itself. Remind the police who's the boss with this yaKesho graphic merch. 👊🏿👊🏾👊🏽

Sometimes the means to an end erroneously becomes the end in and of itself. Remind the police who's the boss with this yaKesho graphic merch. 👊🏿👊🏾👊🏽

Joe Sexton is a senior editor at ProPublica. Before coming to ProPublica in 2013, he had worked for 25 years as a reporter and editor at The New York Times.

More on: End the Death Penalty

Making sense of the Supreme Court's series of death penalty rulings after the Domineque Ray case and the court's apparent drift away from the political center.
Subscribe to Our Monthly Magazine